Despite the cold conditions 71 children travelled from far and wide to compete against each other for the National Titles in 6 age categories in both the roped (Lead and top-rope) and Speed disciplines.

Among those taking part were juniors from Durham Climbing Centre; Thomas Dumble and Joseph McGrother. Both youngsters began climbing at Durham Climbing Centre shortly after we opened in 2007. They train each week in Tuesday’s Academy Session with Coach James Hunter. Thomas and Joseph also practice roped climbing at other centres throughout the region.

Thomas finished in 2nd place in both lead and speed disciplines, while Joseph narrowly missed out on the final finishing 5th in lead but made it into the speed final!

We spoke to Thomas about his experience at Ratho, here’s what he had to say;

‘There were 2 qualifying routes. I topped the first route on a featured wall, it wasn’t easy as we were not allowed to use features for hands. I went first in my category and topped the route! The second qualifier was harder and longer than the first with some tiny holds. I neared the top with just a couple of holds to go but came off and I was gutted.’

Thomas goes on to describe the final;

‘I went into isolation, which was very tense. Everyone was brought out one by one, I came out 3rd. The route was harder than the qualifiers. I got second highest out of the finalist in my category, just 2 holds off top. Matthew (Fall) topped the route.’

Thomas speaks of the speed discipline

‘I came 2nd in the speed final, it was the first time I have done speed climbing. I got 12 seconds, 1st place got 11.91 seconds so it was very close!’

Thomas added, ‘I must say there was a very warm welcome from all the Scottish competitors, we all cheered each other on and there was a really friendly atmosphere’. Mum added, ‘It was a very tiring day as we made the trip back home to Durham’

An outstanding result for both Thomas and Joseph, everyone at DCC are very proud of these young climbers and all our talented Rock Stars. Keep up the good work and keep training hard! 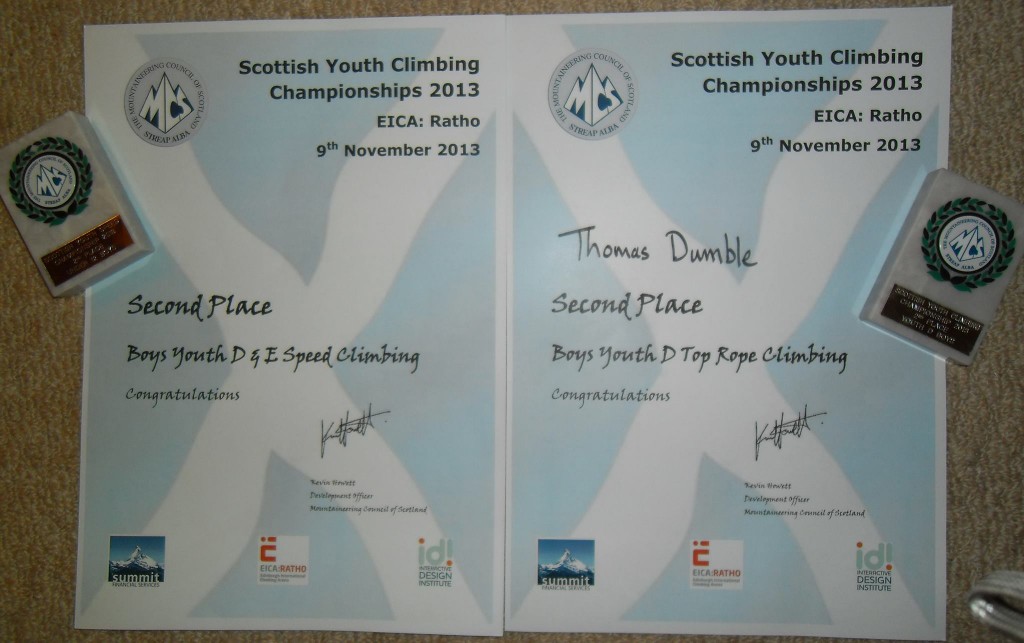