On Saturday 28th January we held our Winter Junior Climbing Competition and thanks to all the keen young climbers who attended it was our biggest and best junior competition yet! Long before the competition was due to start we had eager juniors all ready to go and the centre was really buzzing. We kicked off with a pep talk and set-up of the competition. Then all climbers were divided into their competing categories to warm up and rotate around the competition problems. 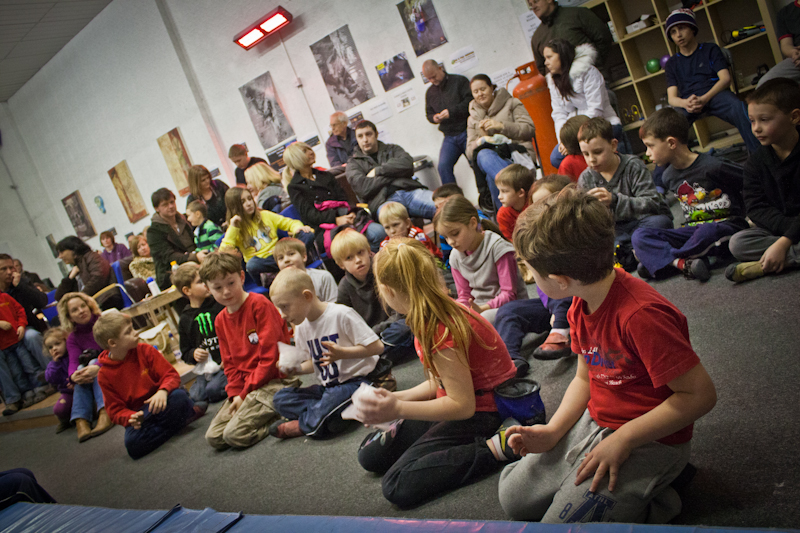 The competition circuit consisted of 15 problems on the junior wall, and a further set of 10 problems in the advanced room, especially designed for climbers with a shorter reach. These problems are designed to enable shorter climbers to enjoy the full range of climbing movement without having to always be at full extension or having or to move dynamically between holds. The problems range from easy to upper mid-range so there is something for all ability levels. 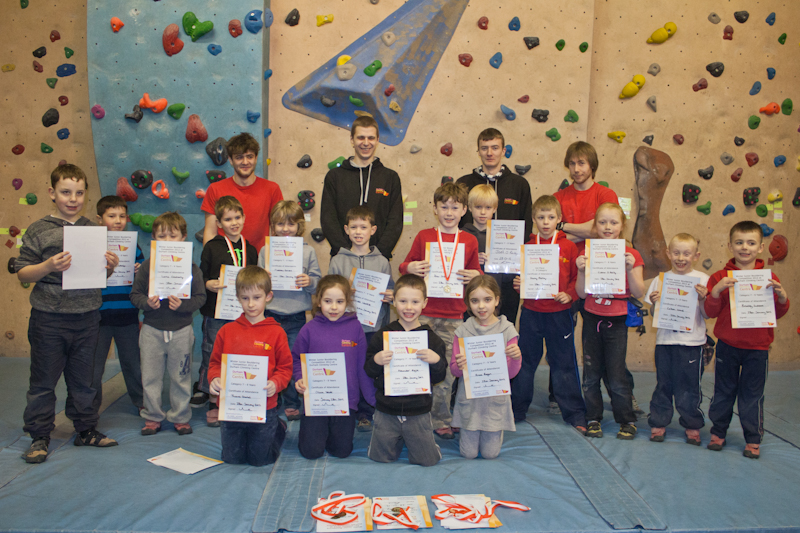 Each category was set a different combination of these climbs in order to cater for all abilities. In addition, the competitors face the infamous hoop traverse; a long problem that involves climbing through 5 hoops for 10 bonus points per hoop. The 7 – 9 group found this pretty challenging, still, over half the group achieved the maximum 50 points for this. Olivia Veide, aged just 7, particularly impressed the coaches with her excellent performance on this problem. 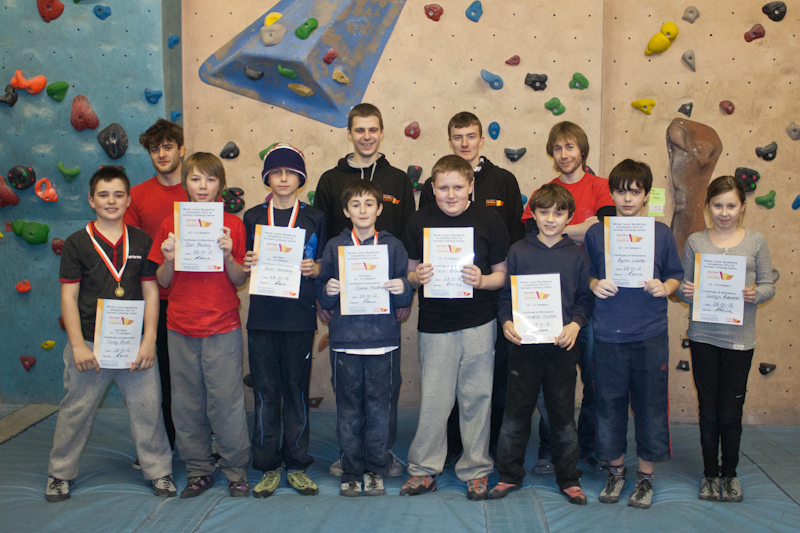 Thomas Charles on the Hoop Traverse 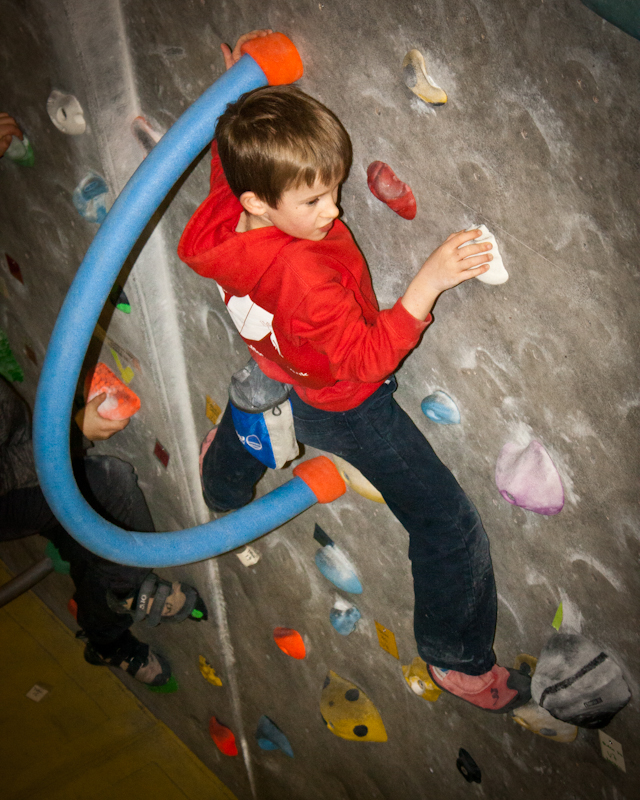 In the 7 – 9 Years Category the scores were even closer with just one point separating 1st, 2nd and 3rd place, won by Joseph McGrother, Alex Orford and Harry Pedley respectively. Joseph aged just 7, and one of our shorter climbers is a real natural talent and put in a fantastic performance. Josh O Reilly and Thomas Charles, just missed out on a podium place coming in fourth and fifth place, but also really impressing the coaches with their climbing skills and cool competition heads. Anna Regan was another junior who really showed great commitment and deserves a special mention as well.

In the 10 – 12 Years Category the competition was really close as well, with Jason Halliday finishing in first place with 260 points. Jason’s commitment through regular attendance at the Rock Star evening classes is really paying off and he is rapidly developing into a very talented young climber. Corey Binks came in a very close second with 254 points, closely followed by Robbie Marshall with 247 points. Corey and Robbie picked up 2nd and 3rd place medals again in this competition to add to their stash from previous comps at DCC!

In the Advanced Category, Junior Academy attendees Thomas Dumble and Jonah Kirtley were pretty evenly matched, taking it in turns to flash problems and getting most of the harder ones on their second or third attempts. In the end Jonah came out on top with a final score of 191 and Thomas finished on a very respectable 184. We were really impressed with these two young stars for the encouragement and support they gave each other throughout the competition. 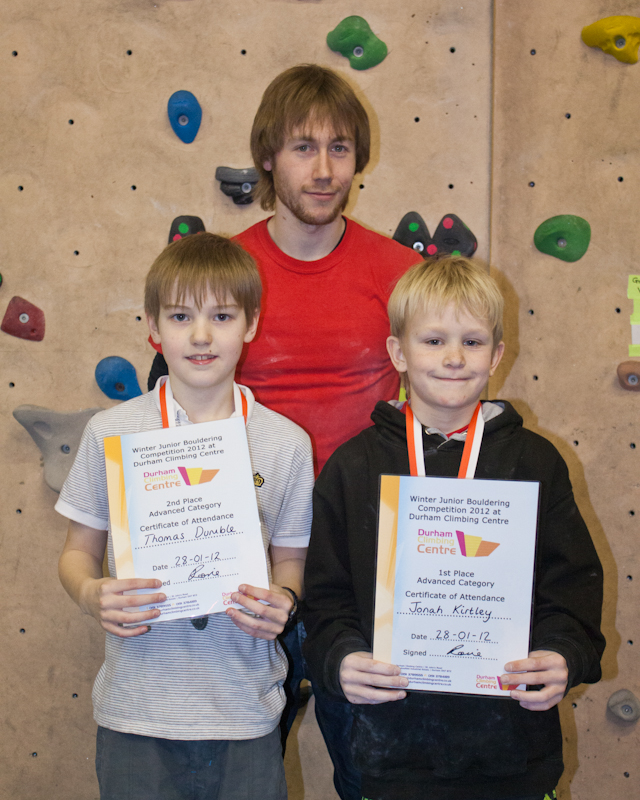 For the first time in a DCC Junior comp extra certificates and medals were given out for special achievement. Kieran Brown achieved his special achievement award for his regular commitment to Rock Star classes and for his focussed approach to the competition – his first back after recovering from a broken leg. Luke Colledge gave 100% effort and his positive competition attitude earned him a special recognition certificate and medal as well.

In the raffle, juniors took turns to pick out names and choose a prize. Bradley Suddes was up first and picked out his own name, winning himself a chalk bag in the process! DCC regular Nathan Jackson also won a new chalk bag in the raffle. Lots of other prizes were given out to the well deserving competitors.

The competition climbs will remain on the junior wall for everyone to try and will be used in the up coming Rock Star classes to focus on areas for improvement. Our juniors will certainly be working on their mantle skills in the next few weeks, as problem 11 a tricky volume mantle, was not conquered by any of the competitors, despite some very concerted efforts! With a little bit more direction from the coaches we are sure this problem will become a breeze for our fantastic Rock Star climbers!

Special mention for two of our juniors who could not attend due to injury Katie Orford and Nicholas Royle… see you next time!

Finally, a huge thank-you to all juniors in attendance and parents for their encouragement. The DCC Coaching team deserved a medal for their outstanding coaching skills and thanks to Daglish Photography for some excellent photographs. DCC Juniors… give yourselves a pat on the back!